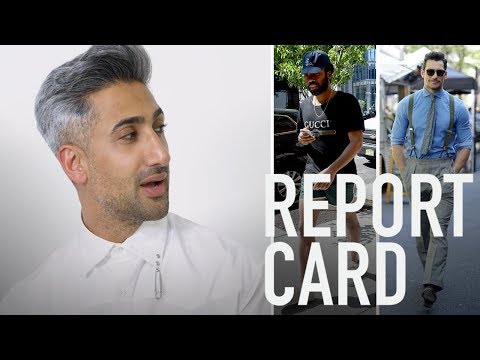 He looks great. He looks better than ever. You know I love a printed short sleeve shirt! It’s like my favorite thing. He looks kind of like you, he dresses like you! Do you think he watches Queer Eye? Yes! I’ve got white skinny jeans, I wear those boots, that’s basically my shirt- Wow, my mind.

And my hair, ***** you ripped me off! Yes, and everything is perfect; the fit is perfect, the shirt is perfect, the lengths are perfect, everything works. Do you know what’s missing? You haven’t watched enough of season two to know this but he’s missing a French tuck, but other than that, he looks pretty great.

He looks great. I’m going to give him an A+. Yeah. I agree! I’m going to say that one’s Childish Gambino, that one’s Donald Glover. He’s so stylish when he wants to make an effort. This is casual, I love that he’s still rocking name brands.

I don’t love the bunny ears on the casual shoes, tuck them in and you’re good to go. And I think he goes for things that a lot of other men would feel too shy to go for. Both of these are not out there of looks, but a lot of men I think would feel that they are and he looks amazing.

And that more dressed up look I would wear every week. I want that shirt. I might wear it too. Look at the pants, look at the fit of those pants. He looks incredible. The dressed-up look is an A+, hands down for me.

And the more casual look, a B. See I’m going to go A, because it’s casual Don living his life in Silver Lake or maybe New York. Casual Don, need we say more? I think like B+. Yeah, take the cap off and it would be an A.

This, God. Here’s the thing: I work on a show called Queer Eye and we are very positive and we like to encourage people to live their best lives- Report Card is not that show. But John Mayer, stop living your best life, live a better life, somebody else’s life.

Those track pants hurt my eyes. The drop crotch sweats you mean? It is not 2012, those shoes are hurting my eyes also. I got Lasik recently and now I’m regretting it; I wish I didn’t have Lasik. I think that’s a white puka shell necklace.

Why the **** do we have a white puka shell necklace on with active wear? Why don’t you use some product in your hair? I can’t even look at it. I mean I have been seeing those puka shell necklaces on the kids around, which doesn’t speak well for John Mayer in this instance because he’s like 40.

You’re making a mistake, hard pass. Stop! Stop! I’m going to go fail. I think we fail. 100%. Oh, Michael. Michael, Michael. You don’t like it? I mean I like it, but the glasses are kind of killing me.

It’s a little police detective off duty for me, or maybe on duty like a P.I. The grey pant is not really my favorite thing and the kind of like, terra cotta shirt. That’s what’s killing it for me is the terra cotta shirt.

I think otherwise it actually is pretty chic and modern especially for Michael Cera. But the shirt is kind of like, what? I like it, and let me tell you why: if this were on the streets of London, which I actually think it is by the double stripe, or in Europe, that would be chic AF.

It is just because he’s got that dodgy hair. If I had this on I think I’d be like OK this feels right! But when it’s on Michael Cera I’m like, Michael Cera what are you doing? If we’re truly judging it by the style and the clothes, I would give it a B.

If you really break it down- All the pieces are there, for sure and it’s working to a degree. OK, so, Richard just released a collection with a brand. I think that he’s one to watch for years and years to come.

I love when a man really makes an effort and steps up every day. Unfortunately, this was not that day. We all need a day off. It’s not costume-y but it’s ridiculous. Yeah, it’s like you tried so hard to make fetch happen.

That’s the thing that gets me, is the try hard-ness of this, even though he is giving a Daniel Day Lewis kind of thing which I like a lot. C-, D, is D a thing? D is a thing, yeah. I think we’re in D range.

Yeah, I’m going to go C- because- You think he’s hot. I do think he’s hot. Isn’t that the worst? I’m so sorry everyone at home, we don’t encourage this on Queer Eye. We don’t base our decisions on whether they’re attractive or not.

She’s a terrible person, she’s going to hell. There’s no editorial transparency right now. This is Jeff Goldblum take two, in a look that is beloved by him and street style influencers. OK, side-by-side, I think the 60-something-year-old looks way better than the, I’m assuming, 20-something-year-old.

Sometimes I think kids these days, god I sound like a grandpa, I’m 35, so be it. He’s too try hard. This ugly movement, you know when they want to look, dress ugly, again I know I’ve said it before, I’m going to say it a thousand times over: you’re going to regret it in, not even, five years, two years.

You’re going to ask yourself: why was I so supportive of a trend that was called the ugly trend? He probably regrets it now. Yeah, I’m sure he sees that picture and sees, Jeff Goldblum schooled me? The influencer, he’s trying too hard, the pants are heinous, the shoes are heinous.

Whereas Jeff Goldblum, he just put it on, with some sensible jeans and a nice shirt. He let the statement shirt have its moment. It’s a statement shirt, you don’t need to go HAM everywhere else! He looks so slick.

And the other person? I’m going to go C-. I agree, actually completely; an A for Jeff a C for the other guy because the shirt is awesome, that’s carrying the C. It’s literally, the shirt gets the C. Now, I wanted us to talk about this because I want to talk about him.

I don’t care care about the clothes, David Gandy you can have nothing on, preferably, or even a potato sack, you’re going to look gorgeous. This is a good look too. It’s a really good look, a bit costume-y.

It is but it’s like a Mad Men fantasy, on somebody like this, not otherwise. I think I would roll my eyes if I saw another guy wearing this. Exactly! It would be like; you’re trying too much. Yeah, and then you’re saying hey broseph, maybe chill out? This isn’t a TV set.

Yes, and you’re not David Gandy. So, what are we scoring him? A+, forget that he’s got clothes on, A+. Oh, yeah, A+ too, across the board. I kind of love this. I love it too, however you’ve got to have a lot of confidence to be able to pull that off.

There’s a lot, it’s a lot. But I do love the earring, shout out to the earring. Gelled curls were a thing, I don’t think its a look for all of you guys. Please don’t do it. I usually want to do whatever you think is right, but that one, I promise you you’re going to look back in five years and be like, what the heck was I thinking? So, this is a don’t try this at home kind of situation.

This might have happened in Milan, but we should not attempt. He looks super stylish; he can get away with it, regular folk can’t. You’re not going to be happy if you go to the grocery store looking like that.

It really keeps things fresh for me, yeah. You guys, do yourself a favor! Go subscribe to WWD’s YouTube channel.

hey it’s Jackie and welcome back to my channel for …