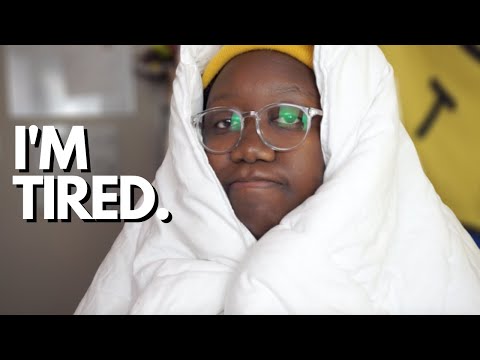 Shout-out to SquareSpace for sponsoring today’s video. Hey YouTube world. It’s me, Evelyn. I’m coming to you in the spirit of … of a dirty duvet, okay? I’m giving you real-weighted-blanket-energy. I actually had another video planned, filmed.

The energy that I had in that video, I was like, “Who’s that girl?” ♪♪ Staring straight back at me? And when will my … ♪♪ Anyway, I was just looking back at it and I was like, “You know what? I’m not there anymore.

In the spirit of fatigue, I wanted to actually explain why I made the video “Call In Black” in 2015. Story time! “Call In Black” is a video that makes the rounds every, every time something happens. You know? It’s like the Bat-Signal of grief.

When someone tags me in that video, I’m like, “Who died today? Like, what happened now? Where? How? When? Who? For what?” “Call in Black” was a video I made in 2015 for the YouTube channel and for the plat .

.. website, platform “For Harriet.” In response to how I felt about the death of Sandra Bland. Sandra Bland was found hanging in her jail cell three days after being arrested for not using her blinker.

Um … and it was ruled a suicide. I hate it here. Okay? (Laughs) That was 2015. Waller County is a smooth like two hours away from where I’m sitting today right now, in Austin, Texas. What’s that highway 290? I drive down highway 290, you know, to visit baby blo in Houston.

Not now. It’s COVID. It messed me up. It messed me up because we are the same person. And for me that was a breaking point. I remember where I was when I was reading um … about it. I was at work. And I was sitting at my desk.

I was a social media manager at the time. And I just remember having to care about like a Facebook ad, or something. And I just couldn’t be … I couldn’t do it. I went to the bathroom and had a full-blown panic attack.

I’ve never … I never had a panic attack before. Um, I haven’t had one since then. Like, it took very molecule of my body to not pass out on the floor. Like! I mean, the floor was concrete. It was gross.

You know I’m saying? Like, I’m not tryna do all that. I was hittin’ the wall slide. I was just like not in the same reality as everyone else in that office. It was weird. It was a weird sense of I don’t see it for this place of employment at this particular point in time.

I wanna go home. I wanna cry. I want to … I certainly don’t wanna care about a Facebook ad for shampoo. You know what I mean? I don’t wanna target African-American females between the ages of 18 to 34 for a brand of conditioner.

If I had a list of what I cared about at that given point in time, living is pretty much up there. Is, is number one. And at the very bottom I would venture to say, you know, analyzing Twitter data is at the bottom.

It’s at the bottom of my list. It was July, I think, July 2015. And me and Kim over at For Harriet had been talking about like do I wanna make a video for them? And I was like, “Yeah, I don’t have any ideas.

” And you know me. Inspiration has to like … hit. You know, I’m not tryna do no rushed stuff. And Kim was really like, “Oh, bet.” Like, “let me know.” And so time had passed actually since our conversation about me doing a video.

And then all of a sudden, the most unfortunate inspiration hit. And I made “Call in Black.” And it was my humorous way of explaining and hoping that people can relate to this feeling of, “Wow, I gotta walk through the doors and care about nonsense when .

.. I don’t feel safe.” So, I’m like, how ’bout I just go to bed. Can I call in black? Sometimes you wanna phone it in and be like, “Hey, I’m not gon’ be able to make it today.” Reason being, I’m trying to reaffirm my humanity to myself.

I think that’s something I said in the video. I think there is a misconception, just ’cause it’s “hee hee hee, ha ha ha,” it’s not also, “cry, cry, cry.” But I use comedy. It’s my greatest coping mechanism.

That phrase, “You gotta laugh to keep from crying.” Although, I do believe in crying. This is what I’m trying to say. Comedy is the language of the absurd. And nothing is more absurd than hatred. Like, it .

.. it don’t make sense. To hate someone because of, because of who they are. In that way, comedy allows you to call out and to … comedy ain’t nothin’ but some observation. It’s a keen eye. That’s what makes you laugh.

” That’s what makes us laugh. That’s what I did in “Call in Black.” You know, the exaggerated language. The (laughs) the … But the thing is, it wasn’t all that exaggerated. That’s just what I wish I could say.

Also: imagination. Imagination is our greatest superpower as human beings. The human species and our ability to imagine, imagine a world that we want. Imagine a way we see life going. It’s very powerful and so I was just imagining.

“What would it be like if I could call in black? Because that is what I want to do.” And that’s that on that. That’s why I made “Call in Black.” Um, it has been shared far and wide. It went viral. Every once in a while, someone will contact me about starting an official call in black day.

Those of us with disposable income, I will take the lead of poor folks on that one. But I will never tell somebody to call in, uh, without their blessing, without their guidance. Okay? What we can do is donate to mutual aid funds.

The people who have to have contact and interaction with people day in day out, that’s who really super, super duper need to call in black. So, if we can support them and if we can say, “Hey, man, what’s a week of your expenses? We got it covered.

But I want to validate the feelings that you have. They are not random, they are not strange, they’re very real. Very, very real. Um, and… We deserve a break. God damn. I am a storyteller and so that’s what I did, is I shared my story of how I was feeling in creative ways.

So. A word from our sponsor. This video is sponsored by SquareSpace. Shoutout to SquareSpace for not making me do anything extra. (Laughs) I’ma let voiceover Evelyn take it away. Squarespace gives you a powerful and beautiful online platform to create your own website.

I use it as a landing page where you can learn more about me, what I do, and how we can work together. There are blogging tools that allow you to share and schedule out your posts, Squarespace email campaigns to help your business stand out, and if you scroll to the bottom of my website or click the in the video description box, you can sign up for my email newsletter.

And you can authenticate with your social media profiles, which lets you auto-post to Twitter, Facebook, and Tumblr. Visit squarespace.com for a free trial, check things out, play around, and when you’re ready to launch, go to squarespace.

com/evelynfromtheinternets to save 10% off your first purchase of a website or a domain. In the comments below, let me know how you’re feeling. I don’t really be havin’ any, um, questions. (Laughs) I’m not ready for new information, okay.

So much information. But let me know how you feel. If you ever wanted to call in black and I will see you on the internet somewhere. Bye! Oh! I’m coming to you in the spirit of cramps. Okay? The cramp constituency.

If you are part of the cramp having constituency, uh, we can all touch and agree that it knocks the life out yo body. It just.

Welcome back to my channel and today I have a …