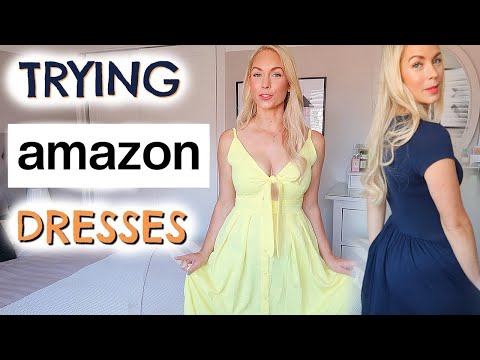 – Hi guys, welcome back to my channel. In today’s video, I’m going to be doing an Amazon haul and try-on, because the other day on Instagram I put up a photo of me wearing a pink dress, and I have never had so many comments and messages about a dress before, and I found it on Amazon.

This isn’t sponsored at all, I just never turned to Amazon for fashion, so I thought, why not test it out myself? When I went on there initially, it felt a little bit like ASOS, there is so much fashion on there.

There are also loads of brands, there was New Look, Dorothy Perkins, French Connection, so, so many. I’ve tried to focus mostly on just Amazon brands that aren’t branded. They were all very reasonable in price, a lot of them came next day on Prime.

There are three dresses that haven’t arrived yet and won’t arrive for another week, and because I didn’t check the delivery dates, I didn’t really realize that. So I think I’m just been so spoiled from Prime that I was a bit like, oh, it’s gonna take a week! So that’s the only thing I would say.

Yes, but I’m just gonna open up the dresses, try them on, and let’s see if they’re any good. If you like any of them, of course I’ll put the links in the description down below. So yes, let’s start. So the first dress I wanted to show you is the pink one that I’ve put up on Instagram.

It is almost like a shirt material, it feels like, it probably could do with an iron. I’ve worn it and I washed it already. It goes down, it’s like a mid-y length, so it’s past the knee, but I really love that length for when I’m just running around doing my errands, it’s really practical.

It’s very comfortable, it kind of goes in there and then goes out. It’s got two big pockets here, and it was just 11 pounds 99. And it came in four different colors, there was black, blue, khaki, and this one.

I went with this one for summer. So many people said to me that they liked it, where is it from? So, yeah, this is dress one. For dress number two, I chose this yellow summer dress. This one was 14.99, and it was Prime.

It came in six different colors, so I’ve got it in this yellow color, and then I’ve also got a navy blue version as well. The top is like this, quite skimpy, and it ties up there. And then there is a cut out here that should show skin, but because I’m wearing a bra, I’m wearing a flesh colored bra, it’s showing that.

I do think it would be better if you could get away with not wearing a bra with this dress, but I can’t. But it’s really flattering, it comes down to mid-shin, so just there. There’s buttons all the way up the skirt that do actually undo, not that you’re gonna undo them.

Or for on holiday, I’m definitely gonna take it away with us, if I can find a bra that works with it. But yes, let me know what you think! I think it’s really cute, and it’s so reasonably priced. All of the dresses I got are pretty much Primark prices.

So this is the yellow version, and I’ll show you the blue version. (snaps) Yeah, so this is it! And I think I actually feel more comfortable in this navy blue color, because I’m not worried about anything showing through.

It’s still really, really comfortable. I think it’s really flattering, I love the way it’s tight at the top and then it goes out. With this I’m wearing a black bra, but what I’ve kinda done with the tie is actually tie it around my bra to kind of keep it in place so that little bit of skin shows.

And I think that shows a lot better in this color. But yes, let me know what you think. This one was, again, 14.99, it came in like six different colors, and I really like it for summer. This next dress is my favorite so far.

It is a maxi dress, I got it in navy blue again, just because I like that color on me. This one actually came in 11 different colors, and it was 18.99, it was Prime as well. But the material on it is so soft, it’s like a really, really soft cotton, but really stretchy as well.

It’s full length, it goes right to the floor, I don’t know if you can see that. And it’s quite flowy, but just so comfortable. I’ve actually already worn this one, as soon as it came I was like, I’m gonna wear that.

And I also love that it has pockets. As a busy mum I just love, I can put my mobile phone in here if we’re in a soft play or something like that. I think it can be casual, but then it could also be quite formal as well, you could wear it for so many different things.

I’m definitely gonna go on and get it in another color, there was a really nice green that it comes in. I love it, it’s so, so comfortable, and I think it’s really flattering. Next up I have another maxi dress, which is a T-shirt material, again.

I got this one in gray this time, but this one came in six different colors and it was 16.99. It was Prime as well. Does anyone in the UK remember a clothing brand called Crisp? Because this is Crisp.

So I’m guessing Crisp has left the high street and it is now on Amazon. This is the maxi dress, it is similar to the last one, I think the other one is slightly more flattering. This one kind of comes out a bit more, but it still cinches you in here and then it goes right down to the ground.

This one has no pockets, but it has little capped sleeves which are quite cool. I think this would look really nice with a big statement necklace, you could wear it on a night out or you could equally just wear it in the day.

It’s quite versatile, and as I said it came in loads of different colors. So yes, I know I’m gonna wear this one a lot. This next one can only be described as an adult baby grow. I bought this as a bit of a wildcard, it was 11 pounds 98.

This comes in 30 different colors, I just got it in black because I’m not really that brave. I don’t know if I’m brave enough or cool enough to pull this off. But as I said, it is like an adult baby grow.

It’s a jumpsuit, so it has separate legs but it’s really, really baggy and harem-y if that’s a word. It’s just loads of material. I don’t know if this is even showing up. But yeah, it’s just really saggy, it is so comfortable.

So whilst I won’t be wearing this out, I don’t think, I am definitely keeping it to wear around the house. Or, oh my God, if I was to wear this on a plane I would be so, so comfortable. It’s like a really soft cotton, that stretchy cotton that the blue dress was as well.

This was 9.99, it came in this print or a dark print with flowers all over it. I really like it, I think it’s definitely more professional. The only thing I would say about this one is it is very see-through, you will definitely have to wear a white or flesh slip under it.

I’m so sorry that I’m not, you will be able to see my underwear. Is it bad that I couldn’t be bothered to take it back off, find a slip, and then put that back on? It’s very flattering, it comes with this little belt that you do up here.

And it’s got quite a funky little pattern on it. I like the colors, it’s pink, navy blue, white. And then on the dress itself, although the dress is mid-y length, like to your mid-shin again, it has these slits that go up the side to almost be a mini length there.

So it’s a little bit sexy, but also quite professional. This next dress I’m not 100% sure about. This one was 9.99, it’s very similar to the yellow and navy blue summer dress that I showed you, but this one definitely feels a little bit cheaper.

But it is a bit cheaper. And it is also the kind of material you wouldn’t have to iron, so that is a plus. It’s a similar shape, so it goes down to there and then it goes out, and it’s quite long. I obviously like that kinda style.

It has two big pockets here. It’s just the material feels like, maybe a little synthetic or something like that. Still quite cool, in temperature I mean. And again, you wouldn’t have to iron it whereas I think the other dresses you would have to iron.

This one came in 25 different colors, there were literally patterns with sunflowers on it, there was a pink, black, white, literally so many colors. I just chose this one, which is like blue on white stripe all over it.

It’s got these buttons here. I don’t know, I like it. But I struggle with dresses like this in terms of having to wear a bra, I’d have to wear strapless and then I don’t think it would look as nice. But it’s super reasonable in price.

And the last dress I wanted to show you I’ve left ’til the end, because this one is actually a brand name. This is New Look. And it is this V-neck pinny dress. It was just 10 pounds, so I thought that was a bit of a bargain, and I liked the way it went like that.

I’m gonna wear a T-shirt under it because it is quite low cut otherwise. I think it looks really casual, really nice. These pockets, there’s two pockets on the side, they don’t seem to be opening. But I think I have to unstitch them or something.

I really like it, it’s a denim dress. It’s quite short, but not too short. I shared this on my Instagram stories, but I will put the link down below as well. So yes, let me know what you think. These are all the dresses that I wanted to show you.

Let me know which one was your favorite and if you’ve ever tried out Amazon fashion. I think it’s actually been quite a win and I’ll predict, in the future, knowing Amazon, is probably gonna take off and be a really big thing.

Thank you so much for watching, and I’ll see you in my next one. Bye guys!

Hi, everyone! Welcome back to my channel. And for this …