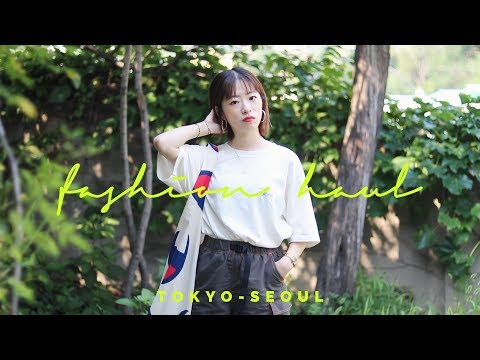 [ i n t r o ] It’s a new Fashion Haul video for a long time! From the end of April to the beginning of May. I’ve been to Tokyo for about a week. A week trip is a little long tho, the first goal is to take a break first! just relaxing, easy going, having delicious foods, and I even took a rest in my accommo sometimes.

Every time I go to Tokyo, I tend to overspend. As the first goal of this trip is to ‘take a break’ ‘Let’s refrain from shopping a little …’ This is exactly what I promised. so the criteria just i set is ‘shop for less than 1000$!’ I’m not sure I bought a lot .

.. Anyway, I shopped less than 1000$. Well… almost fashion products as always! such as clothes and accessories for this summer Especially this time I bought a lot of summer bags. Since it’s been for a long time, green green~ I wanted to shoot with this natural scenery, so I prepared shooting at this special place.

you would hear the sound of birds and the wind. I’m not sure it’s ok for you to hear. I hope you would think it’s just the sound of nature..? (There’s gonna be a lot of friends(?) during watching) Then, the fashion products from Tokyo, Japan I’ll show you one by one.

The first product I’d like to introduce This! champion! most things are bags i think. This is a too championous(?) eco bag. It folds so naturally when I carrying this on my shoulder. I bought it because it’s a design that allows me to carry it comfortably on my trip.

Champion! Champion! (lol!) This cute pattern is reasonable to buy. I think it’s a useful product that can be carried gently around in this summer. This is something similar. a bok-jo-ri bag (kinda Korean lucky bag) It’s called a bucket bag as well The strap looks like a a shoelace, so it’s really light.

so good to carry around easily Here is the inner space that I could carry my wallet or simple things. I think it’s better for a basic style such as shirts&slacks than a street fashion I wear often. To celebrate the first anniversary at the Champion Shibuya store, they gave me another eco bag.

It says it’s a champion. Obviously I bought just two bags… but why do I feel like I bought three…? (It’s even of good quality.) I bought socks also from Champion This pattern also says ‘Champion Champion’ (lol) It’s so cute.

But this has not started yet. I bought two pairs of socks from champion. it’s one of them, and the other one is…Hup!! here (??What are u doin’?) sis: That’s a bit too much. – seems ridiculous? – yes.

..(so honest) I’m gonna start wearing this also soon 😀 The second brand I’d like to show you Again on this trip, I tried NOT to buy but I bought something from Supreme unwillingly(?) When I went to Tokyo this time There were no popular products, only a few minor inventories left.

so I just brought this one. This is a necklace bag. named a ‘Utility Pouch’ Thickness is so thin, i think that’s the reason called ‘a pouch’ The front part is made of PVC. I honestly don’t know what to put inside.

It’s little bit funny to go with ID cards, or money ? I don’t think so either ㅋㅋㅋㅋ But letting this place empty not put anything in is…. It seems like something lacking. So I just took this Supreme tag from my camp cap and put in this space not to be boring.

I’m not sure it looks not bad. Oh, and this necklace can adjust the length. I can cross like a cross bag, and as I showed you just before, it’s able to be hanged it on my neck. But to do that, I shouldn’t put a lot of stuff in my bag.

It’s a bit heavy on the neck. just with my iphone…. and lip balm? and my card holder. that’s it. Now what? Let me show you this. The next brand I’d like to introduce is CDG. They opened a new CDG Flagship Store in Omotesando! So the product I bought is.

… this bag! I have wanted earnestly for a long time ㅠㅠ I didn’t even worry, I just bought it. Because it’s so big, I usually bring my laptop. It’s so cute when I carry on as a cross bag If I slung this over my one shoulder, it goes well even for a little formal style.

The downside is it’s white. so even though I pay attention it’s really easy to be stained. Fortunately, there are 4 buttons on the bottom of the bag to protect As usual white goods we would say ‘the stain makes look much better’ So this product (My sis is laughing at me) So this product as well, I understand if it’s getting dirty and carry around often.

Next brand also I stopped by every time I go to Tokyo. It’s Bape! T-shirts again. So I think you’d be bored ㅠ_ㅠ But there’s something new! It has Bape’s signature pattern but prints a little differently.

Behind it (logo typing) It is men’s M size. so when I wear it, I get a over fit style. This is the same pattern, it’s a ladies’ product. when I asked, they said only XS and S size. I think this is for 85 to 90 (Korean standards size) There is a pastel-colored camouflage pattern, and logo typing in the back same as previous one the same pattern as seen, but it feels a bit more cute.

I think this color is good for a more street mood. To be honest, I stop by here every too often. I’m a little bit embarrassed to introduce the next brand. It’s Stussy! I went to the Stussy store in Daikanyama.

I bought a tee and this pants. I bought these two to wear just in sets. Already I have a lot of white t-shirts … I bought it because it’s slayed cream color. This purple logo is too cute anyway. These pants are kinda trendy style designed with camping belt and pockets.

so it’s very comfortable. Because Stussy is the place that I goes too often, so I vowed to buy only one set. so I bought just one set like this. The next product is This is from BEAMS Before this wallet .

… (Let’s see the new friend^-^) Even before this wallet, I used a wallet made of nylon cloth. It’s waterproof and lightweight. so I’ve always wanted a porter’s wallet. Finallly I bought this wallet from Beams.

It’s a porter’s product but a collaboration with beams. So I think it sells only at Beams stores. the unusual thing is It has the Velcro like this. (I said it wrong as Zipper) How do i make this? It can also be folded upside down.

I can put some coins in here. so I like it more. Porter-like, clean, rugged design. black with orange as the point. I think that’s part of the porter sense. Yes, this is the porter wallet I bought at the Beams store.

the products from Tokyo Adidas flagship store, Plus there are some products from Adidas Korea online shop Let me show you them all together. I found a bit of a shocking fact (?) I’ll explain this story with the product soon.

Anyway, the first product from Adidas in Tokyo! This cropped top and This tulle skirt. I bought it as soon as I saw it because I wanted to wear it at the music festival! I think it’s a so unique skirt.

a shalala(?) skirt like this Three lines of Adidas are on both sides I don’t know if I can wear it honestly as a Daily Look. This is just for festivals anyway the shocking thing was when I first got dressed.

The tag was written in Korean with ‘아디다스코리아(Adidas Korea)’ at the end. The price was similar to Korean or a little expensive. There is a possibility that made by Adidas Korea and passed to Japan.

(I should’ve buy them in Korea..) It’s the sleeveless cropped top. I think it’s a good design to wear for an special outing. Cropped-design is sooooo cute. It seems made out of fine cotton material. and black! so comfortable there were many more things I wanted to buy at Adidas store tho I thought ‘very glad I didn’t buy them in Tokyo’ (self-praise?) When I came back to Korea, they were having a sale as it so happened.

I bought online more things I wanted to buy It’s called ‘cycling shorts’ It is kinda thighs leggings. I originally bought this pair of leggings to match with the tulle skirt together But it’s toooooo comfortable, so I got to wear pants only more often.

With a oversized-tee, when I wear these bike pants, It’s really easy. I wear it often when I exercise or when I go out to the neighborhood. The shorts! Most training pants are pretty short. so I need to wear underpants together or I have to wear just as a sportswear.

In case of this pants, the length is longer than I thought. So nice item that I can wear comfortably as a daily look. Finally.. Pa… too many pants… The material is really similar to this pants I’m wearing now Could I say it’s thick and stiff? the pintuck make it look more formal.

I heard my sis (cookie) wears this even when she goes to work ㅋㅋㅋ I’m thinking of wearing pants for going out rather than training pants. So these are the products from Adidas store in Tokyo, and Korea online! So far I’ve shown you guys the fashion products I have purchased from Tokyo (+ Korea) It was my new fashion haul video~~ I prepared a video with a summer picnic mood.

As you guys knew, they are my favorite street brand! through a small purchase on this trip, so glad I could make the video for you guys! I had a great fun shooting. I hope you enjoy this video as always If you have any questions, please leave a comment below.